Alright, it’s time to get a little more serious about the blogging…

I want to talk about my music a bit.  For the last several years I have been building skill as a hand drummer, studying doumbec and working on the art of drumming for belly dancers.  This all started as a fun hobby in the Society for Creative Anachronisms (SCA), but it has grown into a genuine interest in the music and art of drumming for dancers.  I have now studied with some great instructors, including Souhail Kaspar and Raquy Danziger, and they have both influenced my style, but I have also worked with many instructional DVDs and CDs and played with drummers across the United States who have also influenced my playing and beats. 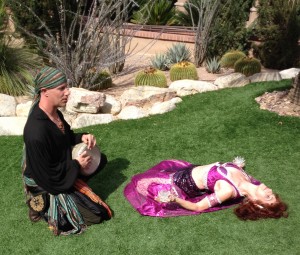 as a drum circle hobby over the past couple of years has grown in the direction of playing with small ensembles, and over the past year I have also started studying a lot of electronic music.  At the beginning of 2011 I connected with Seraphim Rose, who is a great guitar player, dancer and hand drummer.  We have been working since to create music together and conquer the challenges involved with that, learn more and grow as musicians while exploring our creative interests.  As a means to connect more as artists, both with each other and with other musicians we have both begun studying music in earnest, theory, piano, and production – giving us a solid foundation as artists to work from; as well as continuing to build skill on our respective instruments in our Tucson home and studio.

We settled in Tucson, Arizona in November 2011 and rented a house with the intent of building our music contacts and have the practice space and studio setup 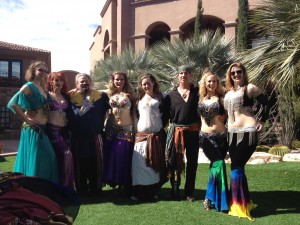 so that we can write music and start performing seriously.  About a month ago we connected with Patrick the Butcher who is a drummer and guitar player who we have known for several years, but who also recently moved to Tucson.  Patrick plays Djembe with a style which is a fusion of both African and Middle Eastern drumming, and also plays rhythm guitar and signs a lot of folk songs.  With Patrick we have an excellent connection which fits well with my our drumming, and also with Seraphim’s guitar playing.  Patrick’s chord progressions give an excellent foundation for Sarah to write music from, and he and I play a solid rhythm together which gives our music an solid beat for belly dance.  We immediately started writing music together under the guise of “The permanently floating riot club” and booked our first performance with the ladies of Troop Hypnotic, the connection of us all can only be described as serendipitous.  Our initial performance together (Feb 11th, 2012) went over with great success, it was a beautiful day, the music was outstanding, and the ladies danced stupendously – we performed two original songs, a couple of drum jams, and some solos.  It was well received, and can best be described as the beginnings of greatness.  Everyone was extremely excited by how quickly everything came together and how great it felt, we’re all excited to write more music, build more performances, and book additional gigs.

Video from the performance should be available soon. 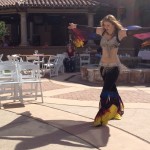 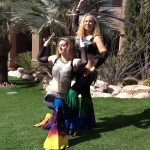 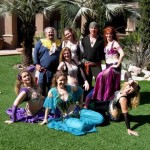